In Memory of Kylon Layne Martindale 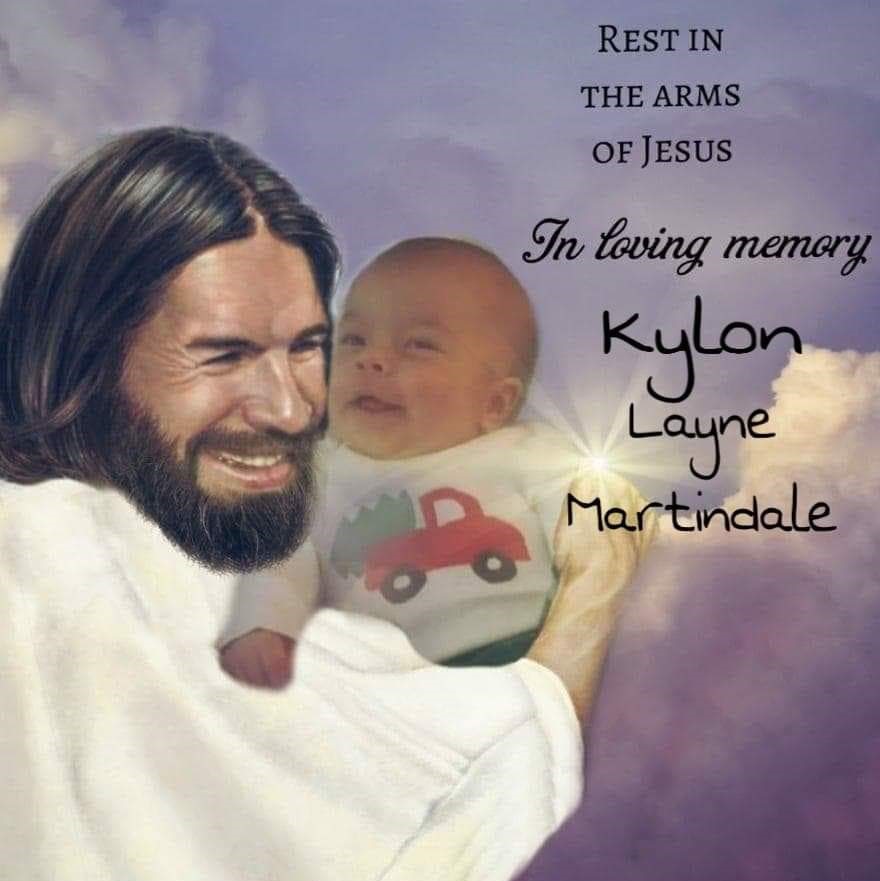 Kylon Layne Martindale passed away gently into the arms of Jesus on April 6, 2020. He was the son of Joshua and Brittany Martindale from Gans, OK, born on Oct 4, 2019, in Fort Smith, AR. He is survived by his parents; brother, Easton Martindale; Grandparents, Joseph Enkoff, Vanessa West and Tony Vaughn, Arley and Merle Martindale, Tracy Barton, Jason and Tammy West; Great Grandparents, Jolene Fletcher and Judith West, and Sara Randell; Numerous aunts and uncles, cousins, and a host of other relatives.

He was preceded in death by his great grandparents, Ponnette and James "Salty" Martindale, Jewel Oglesby, and Frank West.

Graveside services for Kylon will be held on Saturday, April 11, 2020 at 2:00 pm in the Akins Cemetery, with Pastors Jason West and Tommy Noel.

For such a short life Kylon had no problem leaving a big impression on everyone he met. To mom and dad, he was "Kyabug", but to Easton he was KyKy. Every morning he made a point running through the house checking on his little brother KyKy. The connection between these two brothers was one of love, and mischief. Easton stepped up to his big brother duties by teaching Kylon how to take a punch, or pushed him down, but was always around to give him a hug or a kiss. KyKy had great love for Easton to, that was easy to see. When Easton would get in trouble, Kylon was ready to give him support by laughing at him. Surely it was to make his brother feel better, he always wanted to feel close to Easton, and when given the chance, when his brother got close enough, he would reach out and grab a hand full of hair. Easton still never fails every morning calling for his KyKy. You see, for Easton, Kylon was not just a brother, he was his first best friend.

It was not hard to see that the apple did not fall far from the tree with dad. He not only looked just like him, he took after his love for the outdoors. Josh wasted no time to set him outside and introduce to his future of muddling, fishing, and picking up strays. Dad and Kylon had a special bond. Kylon would always perk up when Dad walked in the room as if to say, I'm ready Dad what are we going to do today? When Josh was asked if he had a special moment he could share, he said, "how could I pick any one moment with my son when they were all perfect".

Kyabug had a very special relationship with Mom. It was love at first sight between these two. He had a sweet spirit always letting Mom sleep after working a long shift, watching over her while she slept. The first thing she awoke to, was a great big sweet smile, patiently resting beside her. He had a stare when he looked at her that she often said she felt he was memorizing every part of her soul. As if he knew that he was keeping every detail locked in is little heart. Looking back, it was as if he knew he would be needing these memories to take back to heaven. Leaving her with a subtle voice that whispers, "you will always be with me". With so many sweet memories, the one thing everyone agrees on is that he made it easy to be a parent, grandparent, aunt or uncle. Just easy to love.

Funeral arrangements are under the direction of Forever Memories Funeral Service, Sallisaw, OK